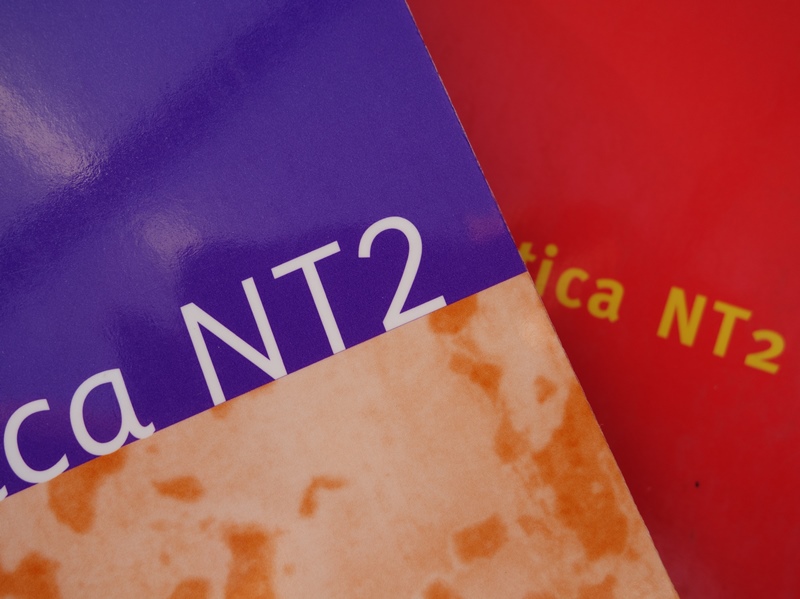 NT2  means Dutch as a second language, Nederlands als Tweede Taal. We all use this abbreviation, but many of us do not know what it means. Pronounce ‘en tea two’!

Native speakers of Dutch speak NT1 (pronounce ‘en tea ane’), meaning ‘Dutch as a first language’. So anyone who has a mother tongue different from Dutch, but who speaks Dutch, speaks NT2, Dutch as a second language – even if it is his third, fourth, or, seventh language.

Users of Dutch as a first language

First: how many persons speak Dutch as a first language? Dutch is their mother tongue and they are called ‘native speakers’. How many  Dutch native speakers are there in the world? About 24 million persons. However, the Netherlands has around 18 million inhabitants, so there must be people outside this small country, who speak Dutch as well. Who and where are they? 6,5 million Belgians and 400.000 inhabitants of Surinam. The last country is a former colony of the Netherlands.

NT2 means Dutch as a second language, but how much is it spoken?

Second: Is there a big number of people that speak Dutch as a second language, NT2? Yes, there is, a quarter of the Dutch population has a non-Dutch background. They are people who came to the Netherlands for work, for love, or, for safety. In the four big towns Amsterdam, Rotterdam, the Hague, and Utrecht, more than half of the population are migrants. Do they all speak NT2, Dutch as a second language? No, and that may cause problems.

Living in the Netherlands without a word of Dutch

What problems might come up living in the Netherlands without a word of Dutch? Most Dutchmen speak English, don’t they? For sure, when you speak English and live in one of the big towns or a university city – you can live pretty well without NT2. On the other hand, how will life be when you have got a family? Yes, 18 towns have International Schools, but their school fees are high. Besides, most children in the Netherlands, from 2 years on, go to a Kinderdagverblijf, where they learn to socialize and play – and even if not- they will pick up Dutch. But, how does it feel when you can’t understand your child and your child’s friends? Not to mention many other problems that may happen to your child when you decide to stay in the Netherlands and you don’t speak a word of Dutch as a second language.

The second best motivation for learning Dutch is work opportunities. Well, your chances are great in 2023 when you are a highly educated male person, work in IT  or technics and speak your English well, but as soon as you miss one of the mentioned points, your chances are better when Dutch is on your cv. And recruiters like facts: a diploma NT2 helps!  You can do Civic Integration Exam. Their names are: Civic Integration Exam,  Staatsexamen Nt2 Programma I en Staatsexamen NT2 Programma II

Unfortunately, speaking some Dutch does not guarantee that you’ll feel at home in the Netherlands. It is not easy to get in close contact with Dutchmen. Even Dutchmen have that problem when they move to a new house- it may take more than a year to feel at home, and accepted in the street. However, speaking Dutch at level  A2 or B1, makes life more comfortable. You’ll understand signs and advertisements, letters from the municipality, and those from schools. At work, you’ll be happy to socialize with your colleagues, and, when you have children, with your children’s friends and their parents.

In addition, if you want a permanent residence permit or naturalization, you must pass one of the three possible civic integration exams. Three? Read more about it in Dutch citizenship, which exam?

Forget the dream that you’ll learn Dutch all by yourself. Yes, you can make a good start, the free app Duolingo helps a lot. Listen to others, read signs and advertisements when in the street, and you’ll reach level A1 in some three months. Taking part in free conversation classes, in your children’s schools, in the neighborhood, or your town’s Library – fine, for the first three months.  However, after that first exposure to Dutch, a Dutch Course brings you safely to your target. Are you highly educated and busy and do you want to study quickly and effectively in the evening, comfortably online?  In that case, Suitcase talen’s flexible modules with the Delft method might suit you. Moreover, with the  Delft method, you’ll learn Dutch as a second language quickly- if you are highly educated and willing to make an effort.

Ask for a free intake interview by phone, using the Contact form.