After fifteen interesting years of cooperation with colleagues, Margreet missed their input and the sharing of ideas.
But, the decision to work alone also gave Margreet a great chance. Now, she could specialize in highly educated people who want to learn Dutch fast. Nowadays, Margreet enjoys her work more than ever.

Margreet’s dedication gives Suitcase talen ​​a good reputation. Because Margreet has a lot of experience, the program is effective and well organized. Moreover, Margreet is always working on new subjects and techniques. 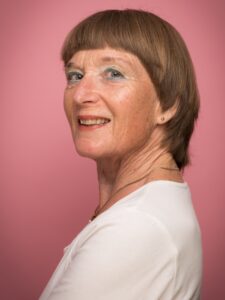 Before she founded Suitcase languages ​​in 1995, Margreet Kwakernaak was a teacher in secondary schools. Additionally, she worked with students aged 18-65 in adult education.
Margreet Kwakernaak studied Spanish language and literature at the University of Amsterdam.

Teaching adults became Margreet’s great love. After 22 years of teaching high school students, she said goodbye to the teenagers. After that, she started her evening school: Suitcase talen. Until Suitcase talen was well established, she combined it with lessons in regular adult education.

Shortly after leaving the school where she had learned to teach Dutch, Margreet wrote her first book:  Dutch for Dummies.  This successful book was followed by seven other Dutch textbooks, including the Werkwoorden op Rij series. Writing became Margaret’s second love.

How Suitcase talen became a school to learn Dutch fast